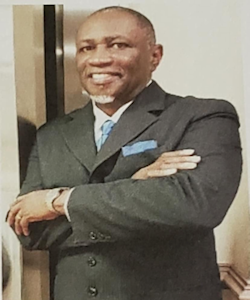 He accepted the Lord Jesus Christ as his Savior at the age of 13. He has been married to the former Gayle Dena Medley for 36 years. They are blessed with two children, Candy and James Jr.

James is a graduate of Manor High School in Portsmouth, Va. He enlisted in the United States Army where he attended the Noncommissioned Officers Academy, Fort Hood, Texas. He is a retired staff sergeant of the Virginia National Guard after 21 years of service. He attended the Evans-Smith Leadership Training Institute, School of Theology, Virginia Union University Extension. After completion, he received the Certificate of Religious Studies. He was employed for 20 years at Northrop Grumman Newport News Shipbuilding as a machinist and was employed at Norfolk Naval Shipyard, Portsmouth, Va. as a foreman. James is now retired from the Norfolk Naval Shipyard after 13 years of service.

Because of his love for the Word of God, James has served in various capacities at First Baptist Church South Portsmouth, including vice chairman of the Deacon ministry and teacher of the Men’s Sunday School class. James heard the call on his life to preach the gospel and was licensed as a Pastor of the Gospel in 1996 at First Baptist Church South Portsmouth. In 2003, the vision for Grace Entwined Ministries was realized. James was ordained November 2006.

James favorite scripture is Proverbs 3:5-6. “Trust in the Lord with all thine heart and lean not unto thine own understanding. In all thy ways acknowledge him and He shall direct thy paths.”